Discussions with professional training leadership throughout Downstate and within the residency training program of the Department of Medicine revealed that knowledge of the topics outlined in this conference were lacking among the leadership and those in training.

According to Philip Alberti, PhD, Association of American Medical Colleges (AAMC) senior director for health equity research and policy, "Insurance does not equal access. Access does not equal utilization. Utilization does not equal quality, and quality does not equal equity." As an example, insured Hispanic adults were more likely to lack a usual provider of care than insured white and black adults, according to a 2015 study by the Commonwealth Fund.

Three major themes/points/messages from the conference

2) Dissemination of Information is Critical

The Skin You’re In: Why Race Determines Health

Director, Center for the Study of Asian American Health

On October 19, 2019, The Brooklyn Health Disparities held their first Health Disparities Conference targeting the insurance market place so there is no direct attendee evaluation to inform the topics in this conference; however, the goals are founded on solid market data and assessment of the need to begin dialogue in such a conference.

Second, in New York State, DSRIP projects improved Medicaid coverage for under insured and uninsured New Yorkers, with a long-range plan to move towards a value-based payment system that will level the playing field for patients and their providers, and hence reduce health disparities.

Population health is generally considered to be a research approach focused on the interdependent determinants of health of populations including medical care, public health interventions, aspects of the social environment (income, education, employment, social support, culture) and of the physical environment (urban design, clean air and water), genetics, and individual behavior. Population health also focuses on how resources to address health in various populations are allocated.

This allocation directly affects access to health care and affects policies that might address the needs of various populations. Research indicates that non citizens and their children were less likely to have health insurance and a regular source of care and had lower use than the U.S. born. As well, foreign born or non-English speakers were less satisfied and reported lower ratings and more discrimination.Immigrants incurred lower costs than the U.S. born, except emergency department expenditures for immigrant children.

In addition to other issues, the conference addressed issues pertaining to health disparities in Asian populations. The Model Minority stereotype suggests that Asian Americans are not an underprivileged racial/ethnic minority due to their economic success compared with other racial/ethnic groups and therefore do not deserve the resources or attention as an ethnic minority group within the American population. However, according to Dr. Grace Ma, president of NIH Asian and Pacific Islander American Organization (APAO)

Asian Americans face health disparities in cancer, chronic diseases, such as heart disease, hypertension, and diabetes, mental health, and among the elderly. It is the only U.S. population suffering cancer as the leading cause of death. In particular, Asian Americans have the highest incidence and mortality rates of liver and stomach cancers--the most preventable cancers-- largely due to high prevalence of related infections such as hepatitis B. In addition, Asian Americans have the lowest cancer screening rates and are typically diagnosed at a later stage compared to other racial and ethnic groups.


End Stage Kidney Disease (ESRD) is associated with higher risk of mortality due to Cardiovascular Disease (CVD). According to current research, Traditional CVD risk factors viz., hypertension, hyperlipidemia, and diabetes do not account for the high cardiovascular risk in CKD patients and also standard clinical interventions for managing CVD that are successful in the general population, are ineffective to lower the death rate in CKD patients. Nontraditional factors, related to disturbed mineral and vitamin D metabolism were able to provide some explanation in terms of vascular calcification, for the increased risk of CVD in CKD.

Findings regarding ESRD and management of this disease are critical as racial/ethnic minorities are 1.5 to nearly 4 times more likely than their non-Hispanic White counterparts to require renal replacement therapy (RRT), with African Americans suffering from the highest rates of ESRD.

Disproportionate rates of cardiovascular disease (CVD) are seen in the U.S. African American population. African American subgroups have a greater burden of myocardial infarction, heart failure, stroke, and other cardiovascular events According to the NYC DOHMH, Community Health Survey, 2015-2016 as reported in the 2018 Community Health Profiles, 36% of East Flatbush (served by Downstate) adults have been told they have hypertension, a leading risk factor for heart disease and stroke. Clearly this topic is critical to the providers and patients of Downstate.

Machine Learning is the learning in which a machine can learn by its own without being explicitly programmed. It is an application of artificial intelligence that provide system the ability to automatically learn and improve from experience. Its use has increased in medicine applications and as such has engendered much discussion about its application and its potential for reducing disparities in health care.

Our conference was  therefore designed to address the aforementioned topics and their implications for the future of health care.

Health Disparities: How Far Have We Come?

Welcome and Introduction : Health Disparities: How Far Have We Come?

Population Health as It Relates to Quality and Cost

At the conclusion of the conference, participants should have be able to: 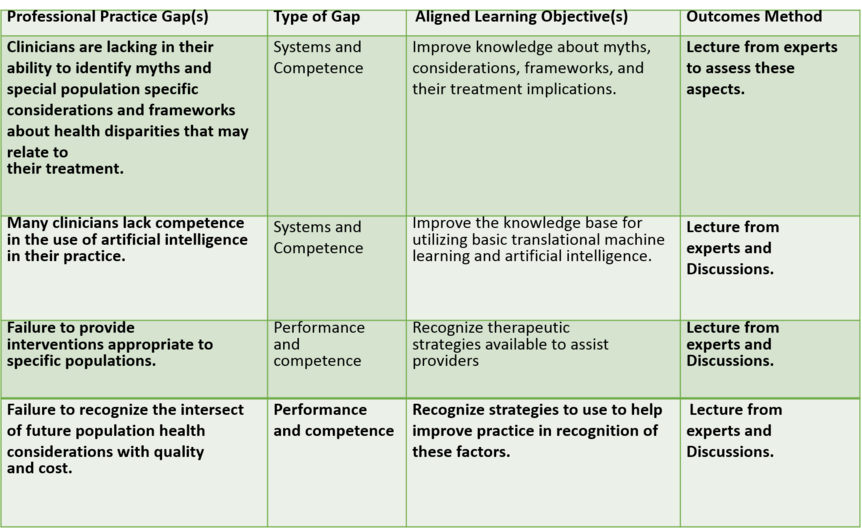